If you have been following the Pakistani music scene, I am very much certain you have heard about Music Mela. If you are someone living in Rawalpindi / Islamabad, you already know it as the biggest music festival in the capital. Music Mela is a top of the line music festival organized every year by an Islamabad-based organization called FACE – Foundation for Arts, Cultural & Education.

The good news is that FACE is bringing the same diverse music experience to Passu this year with a new alias of FACE Mela Passu. The 2-day long event is being organized on 6 and 7 August in collaboration with Aga Khan Rural Support Program (ARKSP). Although Aga Khan Cultural Services Pakistan (AKCSP) has more music relevant portfolio, that’s not the point here.

Who is performing at FACE Passu Mela?

First up is our very own Natasha Baig. She has been a regular face now a Music Mela. This year she did solo performances as well as one with the legendary Mai Dhai. Previously, she has appeared in Music Mela alongside Sounds of Kolachi.Who is going to perform at FACE Mela Passu?

And then there is Bulbulik, the rising musical talent from Gulmit who will also be performing in their home district. They have also made an appearance this year at Music Mela in Islamabad.

The famed Shina singer Jabir Khan Jabir is the third local artist set to perform at FACE Mela Passu. He is quite versatile with genre and language. He is probably the only artist to have performed in all major languages of Gilgit-Baltistan and Chitral.

About the guest artists, there are going to be two three bands and two solo artists. The first band is FACE’s almost in-house band called Qawalistan and the second one is the Peshawar lad-band Khumariyaan. The third is Malang Party led by guitarist and songwriter Zeeshan Mansoor. Qawalistan is led by the founder of FACE himself alongside Imran Aziz Mian. The three bands are known names at Music Mela as well as in the Pakistani music industry.

In the solo segment, there are Wahid Allan Faqir and Stephanie Snowflake, the only international face at the event. Wahid Allan Faqir belongs to a family of folk musicians and is heavily inspired by the legendary Allan Faqir. He has widely performed at folk music stages across Pakistan.

You probably might know Stephanie Snowflake from the Mountain Yoga Retreat by Hunza on Foot. She is a yoga instructor, musician and has been featured a few times as a desi bridal model.

It is surely going to be a one of its kind event in the mesmerizing mountains in Passu.  I am not sure if there ever has been such a diverse musical event in Hunza. In fact, despite being hospitable, friendly and all, we have never seen a Pakistani mainstream artist performing here. But that’s not going to stand longer with FACE Mela Passu bringing in some good mix of national artists to the event.

You can’t miss this. See you all in Hunza. 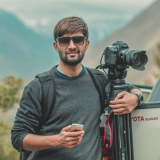 Imran Hunzai is a digital media consultant based out of Islamabad, Pakistan. He contributes a regular story once a fortnight at All Things Hunza under "From Hunza with Love" section. He enjoys traveling, photography and playing Rabab. He also runs a HONY-inspired photo-blog called the Humans of Hunza.

What is All Things Hunza?

Providing customized tours to Hunza Valley and Gilgit-Baltistan to both Pakistani nationals and foreign tourists.

Selling handicraft and organic products online in collaboration with artisans of Hunza Valley and Gilgit-Baltistan.

HoH is inspired by popular photo-blog Humans of New York. The project covers stories of Hunzokutz (People of Hunza).

Read more about All Things Hunza